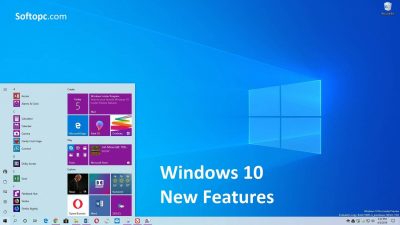 Some new improvements were made to the already available features. You can find the old features and tools more interesting and innovative. Microsoft does innovations with every new release of Windows 10. If you followed us through the article you can find some new features and details about the features.

Read Windows 10 All In One(AIO)

Some of the new interesting features of Windows 10 are discussed below;

You can also control which time of the day or night you want to get the updates. This feature helped a lot of Windows fans because you will automatically get updates for your Windows 10. You do not need to manually check for updates or anything. It will get updates to you automatically without any worries.

Cortana is a digital assistant available in Windows 10. It was a new technology released, for Windows users, in Windows 10. The best thing about this update is that now you can type anything you want and Cortana will find that thing for you.

In the older version of Cortana, you would have to speak aloud in order to get in touch with Cortana. Users would speak aloud if they needed anything. Now, in the latest update for Windows 10, users can type and Cortana will find those results for them.

The new update has done amazing work by improving the search system available in Windows 10. You can now search your results much faster as compared to the older search system.

Windows 10 now offers new unlock sign-in options. You can unlock your device with a PIN or Windows Hello Biometric method. You can also unlock your PC with your face. A face recognition unlocking method is also available in the new update. You can set any of these unlocking methods for unlocking your PC.

Apart from the above-discussed updates, some new and other interesting changes are made to Windows 10. The performance of Windows 10 is improved up to a great extent in the new update. The experience is much more smooth and interesting. You should really try out these new features.