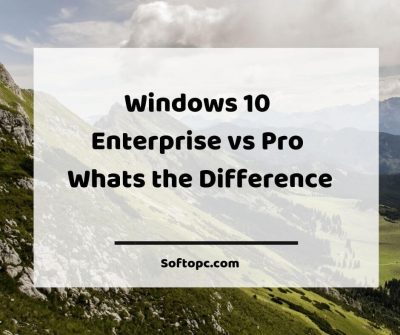 There’s actually at least two versions of Windows enterprise and those are III and II not sure why they’re called that and I don’t believe there’s an e or so don’t know where that came from but just so you know. As far as I know, the only difference between III and E5 is that a has a feature called Windows Defender advanced threat protection which we will get into. I should also mention that it’s not very easy to go out and buy an enterprise key now you can technically do it. I did a bunch of research just to see if it was possible and I was actually able to go through a Microsoft Partner reseller and get a Windows enterprise-e5 subscription. Because yes Windows enterprise only comes as a subscription model so I was able to do it.

It was kind of an involved process you have to like create this Microsoft Azure directory and login with this on your Windows computer and Link it it. It’s a bunch of nonsense so believe me when I say it’s not as simple as going and buying a key plugging it in and then you have enterprise. It’s really not worth it unless you absolutely need one of the features that we’re gonna talk about.

Anyway, let’s get into these features.

The first is one that I did make an article about recently and that is Windows LTS C long term servicing channel. This is exclusive to Enterprise editions and I think it’s actually its own kind of version of the enterprise. Basically, it just means that instead of getting updates every six months or so LTSC just gets one installation and it gets no feature updates only security updates.

So if you’re running this on a system like an ATM or something where you don’t want new features you don’t want anything to change you would use this LT SC servicing channel.

All right so anyway the next feature is Windows to go and it basically allows you to create a full Windows installation on a portable USB Drive. So you can go ahead and plug that into any computer and boot from the drive. It’s a full Windows 10 Enterprise Edition installation you can use it like you normally would, of course, it’s probably gonna be a little bit slower and it does make some changes. Like I don’t think it actually by default gives you access to all the internal hard drives and stuff.

So you know you’re not gonna interfere with it unless you specifically want to on the computer so really just lets you boot your installation of Windows or at least a version of it from anyway.

The next feature is Windows app Locker which is pretty straightforward it basically just allows you to restrict which users on the computer can use which applications. So this might be useful for businesses in a lot of different situations where maybe you’re running a demo and a public kiosk or something and obviously, you don’t want people to exit out of the demo and using Windows regularly.

So you can have it only keep that one application up on the screen or. obviously, if you’re running an office with a lot of different users you don’t want them installing all sorts of random programs and installing viruses and stuff. You can have it only allow the installation of certain files and also, of course, run certain programs. That might even be installed on all computers but you only want admins to be able to run certain software if they log in that sort of thing.

Which is basically like all the bloatware that gets installed on Windows when you first boot it up and you know run installing the suggested apps and all that crap. Basically you can disable that right to the group policy editor. But if you don’t have Windows Enterprise I do believe there is a way to disable that through the registry of course is a little bit more involved.

You don’t want people installing different apps or maybe just hate the Microsoft Store and you don’t want it running at all. I do believe that these settings will still show up in Windows Pro but even if you enable them it doesn’t actually do anything unless you have enterprise running so you might be able to set the settings but I don’t think they actually do anything.