To protect yourself online it’s best to use a different password for each of your accounts, you should try top 5 password managers. For those people remembering all their passwords is nearly impossible. Having a secure password manager is a solution that will create strong passwords to store them in an encrypted database. And will automatically fill in your username and password on sites that need them. which is more secure than writing them down in a notebook or storing them in a text file. 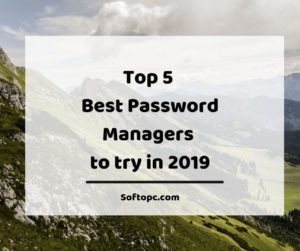 Starting off our countdown at number five is a key pass. This open-source password manager is recommended for more experienced users it may look outdated compared to the others. I’ll show you but is actively being developed. It has many useful features including multi-user support, importing and exporting of files along with downloadable plugins to expand the features available.  Did you tried Best PDF Editing Software

Their powerful password generator lets you define the output characters to create strong random passwords. Key pass is completely free and primarily supports Windows operating systems along with support for Linux and mac using mono. Portable options are also available and let you run it from a USB without needing to install it on your computer. On their site, they also list ports for Android iOS and many others.

Coming in at number four is sticky password which is from the same company that makes AVG Antivirus. As you would expect they’re highly focused on security in addition to their aes- 256 encryption and offline data sync. They also offer fingerprint scanning on iOS and Android devices equipped with a fingerprint scanner to verify the identity of the account holder.

There are two versions of sticky password-free and premium for $29.9 per year the premium edition includes additional features including cloud sync across devices and cloud backup. Sticky password is available for Windows Mac iOS and Android. along with browser extensions for Chrome Firefox and opera.

Up next is RoboForm coming in at number three it’s one of the oldest password managers. It’s first release was way back in rubber form Way back in 1999. The feature set of the top two picks but it’s very user friendly and easy to set up. It also includes many useful features that users will appreciate including one-click logins, offline access along with quick access to your credit card and billing information.

For many their free plan will be sufficient they offer paid versions starting at 19.95 per year with the typical extra benefits including syncing and cross devices, cloud backup and premium support. RoboForm is available for Windows Mac iOS and Android. On Linux and Chrome OS there is no dedicated installer but can be used with limited functionality with browser extensions.

In the runner-up spot coming in at number two is DashLane. This well-known password manager includes a large set of features and is great for beginners in addition to the usual password management features. It includes security alerts sent to your phone or computer when sites suffer breaches.  Also, try Best Graphics Design Software in 2019

They have an excellent password generator and their digital wallet makes paying online quick and easy the free version of dashlane contains all the basic essentials. If you require additional features their paid plans start at 3.33 per month if billed annually which works out to about $29 per year. DashLane is available for Windows Linux Mac Android and iOS it’s free version is so good that it’s worth checking out if for some reason the top pick doesn’t work for you.

Coming in at number one is LastPass. It’s my preferred password manager when I’m not testing out the others. It’s feature-rich and is also great for those of you that have never used a password manager. Before the many features include automatic password capture form filling a digital wallet and many others a cool feature I like is that syncing across devices is completely free.

On most of its rivals, that feature is usually included if you pay for one of their premium plans you should be aware that due to LastPass being so popular. It’s been targeted by cybercriminals in the past thankfully due to their high level of security there have been no cases of master passwords or encrypted logins ever being stolen. For most people, the free plan will be all that they need their paid plans to start at $24 per year and include additional features including online backup and advanced multi-factor authentication.

LastPass is available for Windows Mac Linux Android and iOS. even though it’s the top pick in this video you may find that another password manager suits your needs better. So I encourage you to try out the others that were mentioned as well