Best Software that is Actually Great to Try in 2019

Beginning with this edition of the free software series there are some best software that is actually great and future articles/blogs to come we’ll take a look the best free and open source programs for your computer. In short, when you see the term open-source software it means that its source code is freely available for users to inspect modify and distribute the software to anyone for any reason. But so many free and open-source programs that are actually great. 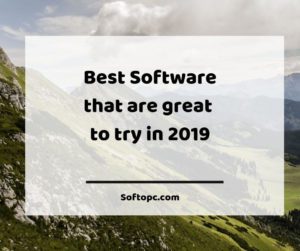 Coming up I will show you seven of our personal favorites many of which you’ve heard me discuss previously in other articles. They’re all well-established trusted and completely free.

First up is Libre Office, this office suite released in is a great alternative to Microsoft Office. The Microsoft Word and Excel alternatives have improved quite a bit over the years when opening and converting those file formats included. LibreOffice is writer which has many of the same features as Microsoft Word. Calc is similar to excel impress can be used instead.

PowerPoint draw is a vector graphics editor and math can be used to create and edit mathematical formulas. LibreOffice is available for Windows Mac and Linux there are two versions available for download there’s one for early adopters that want the latest features and their other one is their stable release with less bugs.

Developed by the Mozilla Foundation way back in the open source Firefox browser is still one of the most popular browsers available. It has a ton of add-ons and extensions that enhance your browsing experience you can sync between your desktop and mobile devices. Includes an excellent manager for bookmarks other browsers that use variants of the Firefox source code.
Include water Fox and the privacy and security-focused tour browser the Firefox web browser is available for Windows Mac and Linux various distributions of Linux. Firefox is often the default web browser.

Next up is OBS studio released in 2012, the screen recorder is available for Windows Linux and Mac. It’s very popular for streaming video games and other live content recordings can also be saved to your computer to be imported into your favorite video editor. If you have an older PC with low system specs you may encounter lag. For most people the only true thick’s for this is to upgrade your computer many users of OBS studio report that they find it to be confusing to use when starting out. I’d highly recommend checking out the various tutorials available online.

Shotcut is a great video editor for new users it was initially released in 2004 and is updated on regular bases. A few years ago it was the first editor I used for editing YouTube videos before switching over to Premiere Pro. It includes a ton of features that are often locked behind a paywall with most free video editors including support for k resolutions and allows for multiple tracks on the same timeline. Also, check out Best Adobe Creative Cloud Alternatives in 2019

If you’ve tried out other video editors shot cuts user interface may not be what you’re used to. For example, when adding tracks to the timeline you have to click on the menu icon in the lower left, then select add video track and go back in and add audio track before adding your clips on the shotcut website. They include video tutorials that will teach you how to use it. Shotcut is available for Windows Mac and Linux.

The oldest program in this video is GIMP, released in 1996. This image editor is one of the best free alternatives to Photoshop. Before we go any further many of the free and open source programs offered depend on the donations of others for development. If you’d like to donate to any project you’ll often see a donate button near the top of their website with Jim it’s to the right of tutorials let’s move on.

GIMP supports layers and includes tools for retouching your photos or creating brand new images from scratch. In the past year GIMP has received a major upgrade making it more useful including cosmetic changes that make it look better. I personally prefer the dark theme but if you don’t here’s how you change the theme go to edit and select preferences, go down to the interface section and select theme your choices are dark, which is what I’m using right now. Grey light and system which is way too bright if you want to check out. Gimp it’s available for download on Linux Mac and Windows.

Share X is one of the best screenshot utilities ever to be created it was initially released in 2007. At this time is only available for computers running Windows or newer with so many features and ways to capture any portion of your screen. It makes the new screenshot tool in the latest version of Windows look pathetic. It’s quite simple to use just go to capture in the left pane and select your screenshot method for simple tasks.

Did you tried Best Graphics Design Software in 2019 with best features?

You can even use ShareX to record your screen otherwise you’re better off using OBS studio. If you select web page capture it works great to capture an entire webpage. At the top just enter the URL of the webpage you’d like to capture in this example I’ll just use the share X website click on capture when it’s done click upload with every screen capture method at the top. You have various ways save upload and mark up your images.

Blender is a 3d computer graphics toolset released in 1998. It’s been used to create animated films, video games, visual effects and a whole lot more. Some of its features include 3d modeling raster graphics editing rigging and skinning and even includes a video editor. Blender does have a high learning curve and the user interface will be overwhelming for first-time users. So I’d recommend checking out the various tutorials on the blender website when you’re getting started using it. Blender is available for Windows Mac and Linux.