In today’s article, we are going to check out the best free graphic design software for those who can’t afford Photoshop. Basically, we’ll be looking at free apps for general graphics and photo editing. Modeling vector graphics and more, most of the software in this Article will be available for Windows and Mac. But there’s also a number of browser-based editors which can be used practically on any computer.
What type of graphics are you guys editing and what’s your favorite free tool? 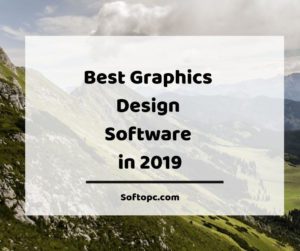 First up we have daz studio which is a free 3d art program developed by daz 3d. They also have another free program called hexagon which is for 3d modeling. Basically, with daz studio, you can sculpt texturize animate and make many more adjustments to 3d models as well as create entire 3d scenes. Even with animation hexagons, on the other hand, allows you to make 3d models from scratch.  Do you have tried Newest Fast Browsers in 2019
These can then be imported into daz studio and other programs for styling animating and rendering. You can also buy premade 3d models from the Daz 3d website or even inside the application itself. Daz studio is available for Windows and Mac.

Blender is another professional free and open-sourced graphics program available for Windows, Mac and Linux. Blender was originally developed back in so it is more than twenty years old. Today which makes me feel really old with the blender you can do many things such as 3d modeling, texturing, sculpting, rigging and skinning. Soft body simulation animating and even video editing. In my opinion, blender has an interface that is somewhat difficult to use but because it has been around for such a long time there’s a ton of free tutorials available on YouTube and other websites.

If you are looking for a program to edit photos and images on your PC then I highly recommend trying out GIMP. Like a blender, GIMP has been around for over years in my opinion. It is the best a general image and graphics editor basically it’s as close as you’re going to get to Adobe Photoshop with free software with GIMP. You can do anything from photo retouching and website graphics to making posters and flyers and much much more.

GIMP also supports plugins and scripts the GIMP interface is fairly easy to use even for beginners there are also tons of free tutorials for gimp on YouTube. Some designers have made GIMP tutorials for photo editing and creating YouTube channel art and thumbnails check them out too.

Without having to install any new software on your PC you might want to try out the Pixlr editor. It’s a free browser-based general image and graphics editor similar to GIMP in many ways. But still quite different you only need a graphical web browser with Adobe Flash support to use the Pixlr editor. So it basically works on almost any computer the editor might look a bit pixel when using it. After you export or save the image that you’ve been editing the quality is normally much like with GIMP.

You can use Pixlr for many purposes from retouching photos to making website banners, social media graphics and the list goes on a lot of general graphics editors such as GIMP have limited support for vector graphics. Vector graphics can be used to more easily make art such as icons, logos, charts diagrams.

One of the best FREE vector graphics editors is definitely Inkscape Inkscape has tons of features such as multiple shape and drawing tools. With it you can create anything from rectangles to ellipses to stars and polygons as well as being able to draw Bezier curves or straight lines these shapes. Llines can then be resized and adjusted after they’ve been created which is not always possible. With raster graphics editors you can download and install Inkscape for Windows Mac and Linux.

Another option for vector graphics editing is vectr. Vectr is free and can be either downloaded or used online in your web browser. So it will work on most computers however unlike the previous web app Pixlr editor vectr is not based in Adobe Flash. The online version of victor is very easy to use you can use victor without an account but if you sign up for one then you can save your projects and continue editing them later.
With vector you can also share links to your projects and even collaborate with friends or coworkers in real-time continuing with web apps.

Next up we have snappa, snapper makes it easier to design a number of different online graphics, for example, Twitter and Facebook headers, infographics, Blog images, ebook covers and more. They have many pre-made templates to choose from even for free users. Snappa also has an archive of free icons stock images and fonts that you can use to make your own graphics. But you can upload your own material as well including fonts.

The snappa interface is quite user-friendly and works great even for beginners. Free users can however only download projects per month and have limited access to templates.It is a web app that’s in many ways similar to snappa but it is more specialized for creating stylish infographics. You can either create an infographic from scratch or choose one of the dozens of free templates. Editing is simple and easily has a lot of free graphics and fonts that you can use when making your infographics all your projects will be saved online as well.