The all-new Galaxy Note and the Galaxy Note 10th and like every other node 10 plus this one is feature-packed. So what are you waiting for let’s dive it?

Let’s take a look at the new features that the Galaxy Note 10. 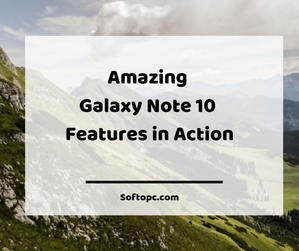 This year the S Pen features an accelerometer and gyroscope for motion control. it basically makes the s-pen a magic wand. So you can still use the s-pen to take down notes doodle on things but you can now use air gestures to control the UI with s-pen. So you can control the UI the apps and a lot more.

Here’s an example as you can see you cannot scroll in the browser through air gestures. Another example this is Devin the controlling the camera app with motion gestures on the s-pen this looks super cool. It seems to work really well and almost flawlessly if you ask.

Honestly I’m not sure if this is just a nice party trick or actually something useful. But yeah it’s an impressive feature and it’s definitely one of the highlights of the note 10 plus. All of these air gestures are customizable so you can set them to work differently in different apps. Samsung is opening up the air actions SDK for developers so we can’t expect this to work in more absolute.

So the Galaxy Note 10 have the triple camera setup from the galaxy s10 which is great. But like the S10 5g the galaxy note template goes one step ahead and adds this fourth camera lens on the back. It’s a d time-of-flight sensor which Samsung is calling the depth vision camera.

Now thanks to the depth vision camera we get a couple of really interesting features first up is a doodle. Which lets you draw things in augmented reality and attach it to say a person’s face. Like this and well these things will remain attached on the person’s face yeah it looks pretty awesome to be honest. The other cool feature thanks to the new time-of-flight sensor is 3d scanning.

Now we couldn’t find the d scanning feature on our note plus demo unit. But check out this demo of 3d scanning from Samsung. But this feature users will be able to turn any object in the real world into a 3d object on the galaxy note. Just scan objects and create a d model of them that will be usable in photos or can be printed using a 3d printer. I think this is really cool and futuristic and I cannot wait to try it out.

Another feature that got us really excited in note 10 plus is the ability to shoot videos with the live bouquet effect. You can choose portrait mode videos with the note flash now here’s a video shot from the galaxy note influx and as you can see here the background is blurred. It’s pretty cool apart from that the note also has dual OAS and what Sampson calls super steady video stabilization so videos should be pretty stable.

Lastly, there is also zoom in mic feature which is one of my favorite video features on the galaxy note 10 tip so what this does is it makes sure that when uses zoom in on the subject of the video. You’ll also be able to zoom in on this subject’s voice. I can definitely see this being handy now apart from that the Galaxy Note 10 has various video editing features which make the Galaxy Note 10 and editing device.

Samsung Dex and Link to Windows:

We found the Samsung Dex feature in the Galaxy Note 10 to be pretty impressive but with the Note 10 it’s got even better the new version of dex. On the Galaxy Note then into a Windows laptop or a MacBook and bring up an interface with all the apps and your files on the note 10. So this way you can access the files and apps on both your PC.

On your phone, it’s way better than connecting a mouse and a keyboard through a monitor to use this a part of that Samsung is also partnered with Microsoft to bridge the gap between the PC. The smartphone the note tent comes with your phone app pre-installed so that Windows users will be able to mirror messages notifications and even the entire screen on their PC. That’s not all the note and also comes with onedrive sync support in the gallery. Yeah, it’s all pretty good.